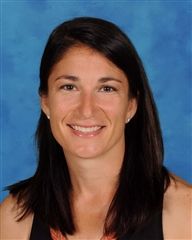 Tina joined the Bryn Mawr faculty in 2007 after spending six years as an assistant soccer coach at several Division I schools, including Towson University, the University of Delaware and Fairfield University.
Prior to becoming the athletic director at Bryn Mawr, she was the assistant athletic director, a middle school advisor, a physical education teacher and the physical education department chair, and also coached various sports.

Currently, Tina is the head coach for the Varsity Soccer program. The soccer team has enjoyed much success under her tutelage, earning three consecutive conference championships in 2009, 2010, and 2011.

Tina graduated from Towson University in 2001 with a B.S. in Physical Education. As a two-year captain and four-year starter for the women’s soccer team at TU, Tina collected various accolades throughout her playing career, and in 2012 became a member of the Towson University Athletics Hall of Fame. She earned her master's in Educational Leadership from the University of Delaware in 2005.
Back