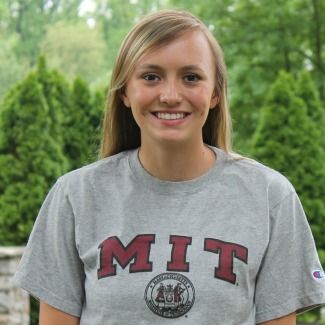 When Tate DeWeese '13 started looking at colleges during her junior year, she narrowed down her list of prospective schools to five places that had two things in common: great academic reputations and field hockey teams. She will attend MIT, where she will be able to pursue her interest in engineering and also her passion for hockey.
Tell me about your college search process.

Junior year I decided that I was going to play field hockey in college, and I started to email the colleges I was interested in to let them know. I was looking at all of the colleges for academics and I didn’t really consider whether they were good at field hockey or not, just whether I could play there. After that I started whittling down the list and finally had a list of five possibilities. I visited MIT, because I’m interested in engineering. I knew it was a reach for academics and for hockey, because they couldn’t guarantee me a spot on the team. But then I got in, and it was all good.

What was it about MIT that you were particularly attracted to?

I really liked the field hockey coach when I visited. I thought she was very nice, straightforward, and it seemed like she really loves the school. When I met with some girls on the field hockey team, I liked how fun and smart and quirky they were. Also, there are so many options for engineering—I can do anything I want, including biomedical engineering, which is what I think I’m interested in. And the last thing that sold it for me was that all the buildings are connected, so I won’t have to be outside in the cold!

I have a natural affinity for math and science, so I’ve known since I was in Lower School that I wanted to go in that direction. My father is a doctor, so I also wanted to do something related to medicine, but not necessarily become a doctor. My dad suggested biomedical engineering, and when I started learning more about it I found that I was really interested in it. Also, at MIT there are two options for biomed—you can either work with medical devices or work with tissues. I’m leaning towards the latter, but I’m not sure yet.

In addition to playing field hockey, what are some other extracurriculars you’d be interested in doing?

I stopped playing lacrosse in middle school, but I think that I might pick it up again in college as a club sport. I’d also like to work with a professor on a project to build a better middle ear, maybe in the summer.

What does that mean, exactly?

I have a fake bone in my middle ear. It is just one bone that goes back and forth so it doesn’t work as well as the three bones that most people have to amplify sound. So, I’d like to work on creating better bones for kids like me who need to get an implant.

How do you think that Bryn Mawr prepared you for MIT and for engineering?

I’ve learned how to work hard and get all of my work done in a timely fashion. I’ve also loved the math and science classes here. Especially in Middle School and Lower School, the teachers I had really helped me appreciate math and science and develop my love for those subjects.

What will you miss most about Bryn Mawr?

Definitely the community. Since it’s such a small school, you get to know everyone in your class and you have a really good relationship with your teachers. I’m sure that once I have 1000 people in my grade I won’t know everyone, and I’ll have to go more out of my way to develop those relationships with teachers. I think that in college you kind of have to make your own community, but it won’t be as tight-knit as it is here.

I really like Gym Drill, even though I don’t like dancing or preparing for it. I just love the day, and having everyone there together. It’s funny—I didn’t like dance class because it's just not my thing, but once we were in our groups and preparing for Gym Drill, we all really wanted to do well.
Back