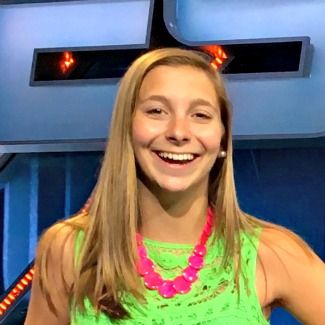 From a very young age, Maddie Brightman ’13 was certain about the career she wanted when she grew up. “I went to my first sports broadcasting camp when I was 10,” Brightman says. “I knew for a really long time that was what I wanted to do.”
As a child, Brightman frequently attended Ravens and Orioles games with her father, who worked for both teams. These outings not only served as father-daughter bonding time, but also built Brightman’s love of sports. This passion grew over the years, so it was only natural that when Brightman graduated from Bryn Mawr, she took the next step in her journey to become a sports broadcaster, enrolling at the Penn State College of Communications.
As a freshman at Penn State, Brightman quickly got involved with ComRadio, the student radio station. She soon found, however, that in addition to being new to the station, something else set her apart: her gender. In a very short time, she had gone from an all-girls environment to the male-dominated world of sports journalism. Brightman took the transition in stride. “I think that being in an all-girls school helped me to realize that it didn’t matter what you came to class wearing, and that you can talk about whatever you wanted, and that carried over to here,” she says. “I was more concerned about the work that I was doing than impressing the boys I was with.”
Brightman moved up the ranks quickly, joining the management team her sophomore year and then earning the title of ComRadio general manager in her junior year. “I would say that a lot of the stuff I learned at Bryn Mawr – being confident in myself, always wanting to go to the next level – was a big part of what helped me to get here,” Brightman says of the position.

Her junior year also brought another accomplishment when Brightman became the first woman ever to give play-by-play for Penn State football on ComRadio. Now a senior, Brightman has had the opportunity to call two more games, including one at the University of Michigan “Big House,” the largest stadium in the United States. “The preparation that goes in to calling a football game is unreal,” says Brightman. “We want to know every single player on the team, and a lot of nitty-gritty stats. It’s really time consuming – it’s like studying for a test.”
Brightman is modest about the groundbreaking nature of this accomplishment, but also quite proud that, in her four years at Penn State, the female involvement in the sports department at ComRadio has noticeably increased. “The fact that this year we had three girls on the schedule – and for one game, we had two girls producing and one calling the game – for me, that was really cool,” says Brightman. “My experience at Bryn Mawr made me realize how big of a deal things like that are – or even that it shouldn’t be a big deal. Why should it be a big deal? Girls should have the opportunity to do that regardless. If you do the preparation and put the work in, anyone can do it.”
With plenty of experience at Penn State under her belt, Brightman is ready for the next step in her career: in June, she’ll begin at ESPN as a production assistant. “To know that I’m going to have the opportunity to work at the leading sports network right out of college is really rewarding,” Brightman says. In the future, she hopes to be a producer, but for now she’s just excited to get started. “I’ve watched ESPN since I was a little kid, and now I get to work there,” she says. “I’m really going to be part of it.”
Back