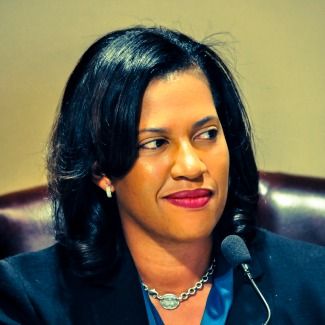 During her years as a Bryn Mawr student, art was always an interest for Kishia Powell ’92. At one point, she thought she would try a career in interior design. But, says Powell with a laugh, “My mom wouldn’t allow me to choose that as a career path because she said I was already good at changing my room around.”
Inspired by an electrical engineer who visited her Upper School math class, Powell decided to pursue engineering. Today, as the Director of Public Works for the city of Jackson, Mississippi, she is responsible for all civil infrastructure, including divisions like Engineering, Solid Waste, Water and Wastewater Management and more. Since starting the job in August of 2014, Powell has identified more than a few areas where change is required. “The city has an estimated $1 billion of needed infrastructure investment, and those are just the things we’ve identified,” she says. “I have a huge responsibility.”

Powell’s responsibility comes with the added challenge of being in a very male-dominated career field. “You have to have a very strong voice, and often you have to know more than your male counterparts in order to be taken seriously,” she says. “Bryn Mawr certainly prepared me for that, because I came away believing that women can do any and everything.”

Since graduating, Powell has stayed connected to Bryn Mawr by volunteering, despite her very busy schedule. “I believe in the mission of the school, and I think that it played such a critical role in my life,” she says. “It’s about continuing to push the envelope to educate women so they have an opportunity, like I did, to be competitive in the world.”
Back