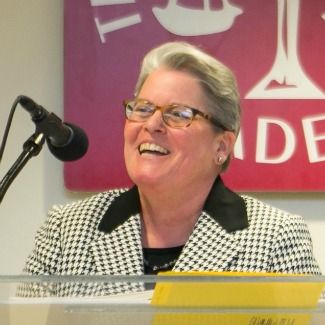 As the executive director of the Transitional Housing Corporation (THC) in Washington, D.C. for ten years, Polly Donaldson ’75 has seen the toll that it takes on a family to have to move into a homeless shelter. “You only go into a homeless shelter if you have absolutely no other place to go,” says Donaldson. But she has also experienced the joy that comes with helping a family begin their journey out of hardship. “It wasn’t like we were transforming them by waving a magic wand,” she remarks. “It was about giving people the foundation from which they were going to be able to change their lives.”
Donaldson’s impressive work with the THC – which included increasing the number of families served each year from about 40 to more than 500 – led to her appointment in January of 2015 as the Director of the Washington, D.C. Department of Housing and Community Development. In this role, Donaldson will lead the charge to ensure that there is adequate affordable housing in D.C., as well as coordinate federal and district resources to meet the need. “[The task] is daunting, but I have a very clear mandate from the mayor,” Donaldson says. “I feel very well prepared for this, and I’m working hard, but I’m prepared to work even harder. Those days of having to work hard started way back at Bryn Mawr.”

Donaldson’s interest in government and public service also started at Bryn Mawr, nurtured by the opportunities she had as a student. She remembers volunteering, which, she says, “encouraged me to see beyond my world.” She was also a member of the early Model United Nations club, and she participated in travel abroad opportunities. Donaldson fondly remembers the arguments and debates she had with her classmates over various political issues during her time as an op-ed writer for the The Quill. “I learned in the classroom, I learned on the playing field, and I just treasured those days,” Donaldson reflects. “Bryn Mawr gave me confidence to be myself, and also gave me the skills early on to do all the things I do now.”
Back