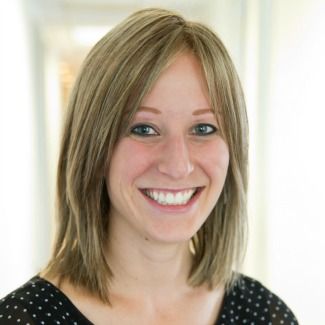 Shortly after joining Creative Associates International, an international development firm, as a senior writer and editor, Jennifer Brookland ’01 traveled to a school in Tajikistan to document the organization’s work there. One moment, in particular, brought home how different her upbringing was from what children in Tajikistan experience. “I went to the bathroom, and it was just a slat of wood with five holes in it,” Brookland remembers. “I thought, wow – can you imagine being at Bryn Mawr and going to the bathroom with four of your friends?”
It was while Brookland was at Bryn Mawr that her interest in international development took shape. The recipient of both the Creative Writing and French Prizes during her senior year, Brookland vividly recalls when, in a Middle School French class, she realized that citizens of many African countries speak French. “That opened up a whole world of interest for me,” she says.

With a bachelor’s in International Politics and African Studies from Georgetown University, Brookland parlayed this interest into a stint as a U.S. Air Force special agent before earning a master’s in journalism from Columbia University and a master’s in international law and diplomacy from Tufts University. Brookland credits Bryn Mawr with preparing her for this educational and professional journey. “Bryn Mawr instilled in me this mindset that there aren’t any limitations on what you can do and learn,” she says. “It’s a huge benefit to have the confidence that you can succeed anywhere.”

Brookland’s interests in development and service extend beyond the professional realm. While in Kenya, she met a man named Charles who worked as a security guard. They became friends, and she learned that his real dream was to attend beauty school – but the cost made it impossible. Inspired by his story, Brookland started an online campaign to raise money for his tuition. With support from her friends, she met her goal, and Charles has since completed school and is setting up his business. “You come across so many people in your life, and so often we don’t ask for their stories,” Brookland reflects. “Charles’ story really touched me, and I just felt like, person to person, I could change somebody’s life in a meaningful way.”
Back