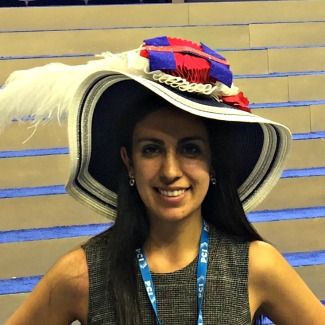 Over the course of her 10 years at Bryn Mawr, Amna Hashmi ’12 learned many things. But one of the most important lessons Bryn Mawr taught her, she says, “is that there is value in my perspective, and that I have a responsibility to serve my community.”
Last spring, that urge inspired her to apply to be a Maryland delegate at the 2016 Democratic National Convention. As a Muslim-American woman and the child of immigrants, Hashmi felt that it was her responsibility to be a voice for those around her. “I intersect a lot of different communities, so for me it became [a situation] where I wanted someone of the communities that I belong to included in this political process,” Hashmi says. “I felt a responsibility to be politically engaged on behalf of people like my parents, and my parents’ friends, and my childhood friends, so it was an opportunity to not only have my views included and represented but to represent others as well.”

The delegate selection process is fairly straightforward: any voter registered with a party can apply by submitting a certificate of candidacy and a candidate pledge form designating their presidential nominee preference. After that, each campaign chooses delegates from this list.

When Hashmi learned she had been selected, she was thrilled, though she had little idea of what to expect. The experience turned out to be almost beyond description. “Even a few weeks after the fact, I’m still having trouble putting it into words,” she says. “Of course, there was the celebrity aspect – hearing speeches from President Obama, Joe Biden, Tim Kaine and Hillary herself – and there was the historic aspect of knowing I was putting in a vote for the first female candidate to be nominated by a major party. But more than that, I think it’s ultimately a gathering of people who are so grateful to be in this country and, regardless of their views, are very invested in trying to move it forward.”

For Hashmi, one of the most significant moments of the convention was the speech given by Khizr Khan, the father of Captain Humayun Khan, a Muslim solider killed in 2004 during the Iraq War. “It was such a simple speech,” Hashmi reflects. “He wasn’t trying to make some big policy argument, he was just saying, ‘my family has sacrificed for this country – recognize that I am here.’ It was so powerful in its simplicity, and it was something that really resonated with me because it was someone in whom I saw so much of myself.”

Another important moment was when Hillary Clinton officially accepted the nomination. Hashmi says that her own experience growing up in an all-girls environment has heightened her feeling of appreciation for all that Clinton has accomplished. “I feel such a connection to her because she went to Wellesley, an all-girls college, and I went to an all-girls school,” Hashmi says. “In my head I have this narrative of, ‘well, if she can do it, I can.’ It’s something that is so ingrained into my values – which are Bryn Mawr values – [the importance] of leading a ‘considered and consequential life.’”

In a year when the political rhetoric has reached new levels of divisiveness, and when Muslims have found themselves the target of many political attacks, Hashmi is proud that she could play a role in representing her community and contributing directly to the political process. “There aren’t that many Muslims in this country. So when people are afraid of Muslims or think that there is a radical Islamic extremist who is coming to get them, they don’t have anyone to compare that image to as someone that they have in their own life,” Hashmi says. “While yes, it is inherently disappointing and hurtful that there is this whole discussion about how ‘radical Islam’ is the appropriate term, when those people don’t represent my community and my faith, the only thing worse that I could do is be angry at them reciprocally. The responsibility and the onus is on me to give voice to the community and engage politically such that I’m not just sitting on my hands and allowing this to happen.”
Back