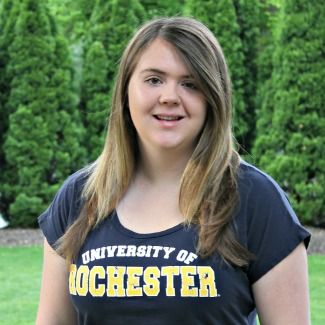 Shaelyn Rhinehart came to Bryn Mawr in first grade. Next year, she will be attending the University of Rochester, where she plans to pursue cognitive neuroscience and music. Read about Shaelyn's Bryn Mawr experience, and her plans for the future.
When did you come to Bryn Mawr, and was it your decision or your parents'?

I came in first grade, and it was my parents’ decision. But I chose to stay. I liked that Bryn Mawr was about learning for the sake of learning rather than learning for the grade, particularly in the Lower School where they encouraged academic creativity. I think that was so beneficial in the long run, and I think I recognized it back then too.

What has your experience at Bryn Mawr been like?

My experience at Bryn Mawr has been really wonderful. I think I couldn’t have gone anywhere else that has such a culture of caring. I realized last year that there’s one thing that unites everybody on campus, and it is this culture of caring about everything you do: grades, the classes you’re taking, the classes you’re teaching, your friends, how your life’s going. You’re not going to find anyone on campus who is at all apathetic. I feel like I’ve very much been swept up in that culture of caring, and that’s really the only way I can describe my experience: having cared about everything along the way.


Tell me about an influential teacher you had or class that you took.

Creative Writing with Mr. Waters was very influential. It completely changed my perspective on writing, and, in particular, Mr. Waters helped me learn to trust my inner writer. He showed us that you should write down whatever you feel at the time, whether it makes sense or not, because sometime in the future those words are going to be right. It was so applicable: I would write down poems that came into my head at the beginning of the year, and then months later would end up incorporating some of the characters from them into my stories, and they were so visible and visceral. There were some people in the class who didn’t really consider themselves to be writers, until Mr. Waters told them “you are a writer. Everyone here is a writer, and anyone in the world can be a writer--it’s just about translating what is inside yourself onto paper.” I’ve never gotten as much out of a class for myself as I did from that one, because I didn’t just learn about writing, I learned about how to tackle looking at myself as well.

What has been your most challenging assignment?

My most challenging assignment wouldn’t be a class, or from a class. Every year Dayseye does serenades, and as the president I had to run them this year. I’ve never gone through a more challenging ordeal in my entire life. It doesn’t sound like it would be that hard—just come up with some love songs and serenade people, right?– but you have to make the arrangements yourself, choose the songs that will work, make a Dayseye serenade committee, get all the seniors to actually meet and put their music down on paper, and all during the stress of the college process. There were so many barriers along the way.

The universe threw everything it could at me. I didn’t have music in when we needed it, there were snow days and we lost whole weeks of school. It was challenging because it was an activity that involved all of Dayseye, but I had to take the lead on it and fix every problem that was threatening to derail Serenades. I had to find my own leadership skills, which involved being upset about everything to myself and one friend, and then turning to Dayseye and telling them all, “we’ve got this – this is how we’re going to fix things."

Everyone in Dayseye was depending on me, everyone in the school was depending on Dayseye, and it was just very difficult because I had to trust so many people around me, but also to trust myself. I’ve never learned as much about leadership, and seen hard work pay off so well, as I did in that experience.

What has the college application process been like for you?

The college application process for me was fine. I was very reasonable when I was looking at colleges, in the sense that I understood that even if I really wanted to go to a particular college, I wouldn’t get in just because I wanted it. And I think that some people really didn’t understand that, and that’s the hard thing about the college process: you can be the perfect applicant and still get rejected. It’s a hard thing to understand. But I went into the college process understanding all of those things, and the way I really looked at every college was in terms of a couple of requirements. I wanted to study cognitive neuroscience and music, which was good because it narrowed down my list very fast, and I also wanted an open curriculum. So I had these three main points and some preferences beyond that, but I really left the whole college search open with respect to location, size, and so on. I think that by giving myself that flexibility it ended up being a pretty easy college process.

In the end I ended up at the one place that was everything I needed it to be, which was my first choice all along. So you really have to trust your gut with the college process, and throughout every rejection, waitlist, or acceptance, you need to believe in yourself. Even if you don’t end up getting in somewhere you wanted to, or maybe somewhere you thought you would get in, it’s not a reflection of who you are. You’re going to end up where you’re supposed to end up. I happened to end up exactly where I wanted to end up, so it was a very good college process for me.

What aspects of Rochester made it your first choice?

Rochester was my first choice because everyone is so down to earth. It’s a really excellent school for the sciences, their English department is great, and they have one of the top conservatories in the country in Eastman. Their brain and cognitive science program is also one of the top in the country, and they have a really amazing English graduate program. So they were incredibly strong in the three aspects I wanted in a college: English/Creative Writing, Cognitive Neuroscience and Music, and they already had a minor for music cognition. The curriculum is set up sort of like distribution requirements: you have one major, and then you take two “clusters” of six classes that can become a minor or another major.

Everyone there is so passionate about what they’re doing, and that’s true at a lot of other colleges, but the difference, for me, is that there are plenty of people at Rochester graduating each year with quadruple majors! It’s totally normal to have three or four majors at this college. At Rochester you can really do it all.

When I went to that information session, the first thing that the admissions representative first said was, “This is the school for the person who loves everything they do and doesn’t want to give anything up. They want to do everything: they want to study Shakespeare and cognitive neuroscience and music and anthropology, find the connections and pull them all together into one thing. They are unwilling to give up any of their passions because they love all of it.” I was sitting there thinking “this is so me.” I’ve been struggling with what I want to be when I grow up since second grade, because society has always made it feel like you have to choose. With cognitive neuroscience and music at Rochester, and with the flexibility and ability they give you to do everything, I don’t have to make that choice. I can make everything I love into one thing.

You’re interested in neuroscience and music. Where did these interests come from and how do you plan on combining them?

I was walking down the stairs in the Hardy building to math class, and I had an epiphany moment. I stopped my friends and said, “We are walking down stairs and we’re not even looking at them! We looked at the first step, and our brain calculated or estimated the distance that our foot had to travel to get to the next one. How is our consciousness doing this? It’s the coolest thing ever!” Of course my friends were standing there thinking that I was crazy and that we had to get to math class. I’m sure they were wondering why I found walking so interesting, but that was my first moment of fascination with the conscious and unconscious mind.

When I started to delve into it and really look at studies that had been done on the unconscious versus the conscious mind—on memory, on language, on movement— I started to realize that there was a whole field, cognitive neuroscience, that was fairly new and progressive, that I had no idea even existed. The more questions I asked about it, the more I realized I could incorporate everything I loved into this one subject, because there are so many studies on music cognition, which is the aspect of music I’m most interested in. I really think that music does communicate things just as much as any language does.

What has it been like being part of Dayseye and participating in music at Bryn Mawr?

Participating in music at Bryn Mawr and being a part of Dayseye--I don’t think I’ve had a better experience in music than I’ve had with Dayseye in the past two years. They mean so much to me and I look forward to it every other day. I’ve done choir outside of school for eight years before this, so I have a lot of experience with music and with choirs outside of school, but I’ve never sung in a choir quite like Dayseye. The difference is that everybody cares for each other so much. We’re sharing pieces of ourselves and presenting them as a unit, as one person. I think it’s a really special group on the Bryn Mawr campus, and I had been wanting to be a part of it since first grade when I heard them sing “Jerusalem." It’s just the most important musical group I’ve ever been a part of, and I miss them every time I’m singing away from them. At Bryn Mawr in particular, the music programs have blossomed exponentially ever since Dr. Shirk came here. The music programs have grown to be so excellent, and are getting better every year; I wish I was still going to be here to be part of it!

What do you think it’s going to be like to sing "Jerusalem" for the last time at Graduation?

It’s going to be so bad - I’m going to cry. I haven’t really let leaving Bryn Mawr hit me yet. I understand it in every logical way, but I can’t imagine being anywhere by Bryn Mawr – going to a school and not having Bryn Mawr around me every day. I’ve been here for twelve years, and in so many ways it’s become a part of my life beyond just going to school. I’ve grown up here. When I leave Bryn Mawr I’m going to leave a part of myself behind, too, and I think I’m going to leave it in that song, particularly because it has to do with Dayseye, music, and singing, and it’s been with me since first grade.
Back